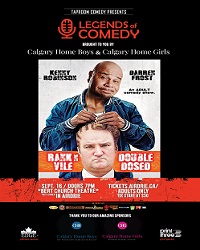 The Legends Series with Rank & Vile

This September Taproom Comedy is bringing in two of Canada’s favourite comedy degenerates, Darren “Little Man Hate” Frost and Kenny “The Raging Bull of Comedy” Robinson as part of their “Rank and Vile” tour across Canada.

It would take too many pages to list their accomplishments so suffice to say these two headliners are something special.

Kenny Robinson has shared the stage with everyone from Chris Rock to Dave Chappel to Jim Carry, and the list goes on. Little Darren Frost has been called, “among the most daring comedians in Canada” by the Toronto Star.

This is not a show for kids. They are profanely funny, outrageous, fearless, and spare nothing in their social commentary.