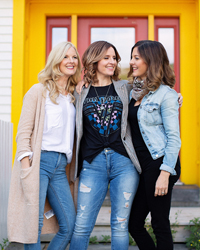 Newfoundland's own Ennis Sisters - Maureen, Karen, and Teresa - come to Airdrie having just released their newest album, Keeping Time. Winners of a Juno, SOCAN Award, and multiple East Coast Music Awards, this celtic trio have released ten studio albums since 1997 and have been featured on CBC with their own Christmas special. Their video "Sing You Home," was featured for The Room's 100th Anniversary of WWI Battle of Beaumont Hamel campaign and won provincial, national, and international awards. Blending sibling rivalry, humour, and beautiful tunes, The Ennis Sisters will leave you with a smile on your face & humming a tune!