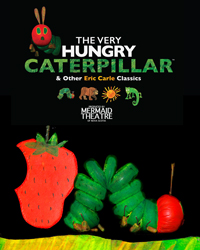 The Very Hungry Caterpillar and Other Eric Carle Classics

Mermaid Theatre’s lively new compilation captures the magic of three Eric Carle classics. The hour-long triple-bill follows the adventures of The Very Hungry Caterpillar as he eats his way through an amazing variety of foods on his path to becoming a beautiful butterfly. The Mixed-Up Chameleon is bored with his life as he sits about changing colour all day until he takes a trip to the zoo. His hilarious attempts to emulate the beautiful animals he sees conclude with his discovery that there is value in his own unique self. The story of Brown Bear, Brown Bear, What Did you See? has helped hundreds of thousands of toddlers to identify colours and creatures. Capturing the rhythmic text and beautiful tissue-paper collage illustrations of the classic picture book, Mermaid's adaption generates fresh appreciation of an endearing cast of characters.